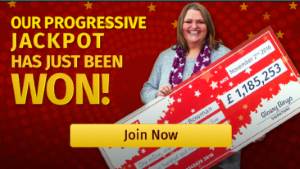 A farmer’s wife who won £1.2 million on a progressive jackpot online slot insists the prize will not see her ditch the farm in favour of a life of luxury.

Mandy Bowman, from Moray in Scotland, won the huge progressive jackpot on the Major Millions slot at Glossy Bingo.

The 45-year-old was down to her last spin on the popular progressive slot when her luck came in.

She said: “I was down to my last £3. I thought there was no way I would win anything then. I spun again and all the symbols matched. I thought I was seeing things and then a message flashed up to say that I had won the jackpot. When I saw the number I thought it was a mistake or a joke – I really didn’t believe it.”

But despite the fact that she and her husband John have yet to take a honeymoon after marrying two years ago, she said there would be no round-the-world cruise. She told the Daily Record: “My husband doesn’t have a passport, so when we do finally take a break it won’t be anywhere exotic – it will be in Scotland.”

She added: “We’ll soon be lambing and then the cows will be out to the field, so it could be May or even June before we can take a holiday.”

Instead, she said the pair planned to build an indoor riding school, and to renovate some of the buildings on the farm.

Mandy told reporters: “I’ve become a millionaire, but the day I really hit the jackpot was the day I met my husband.”